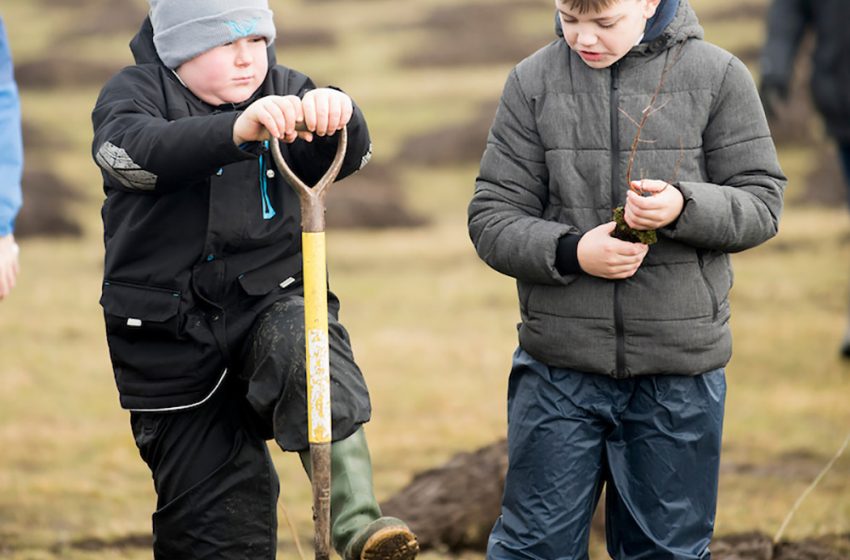 Schoolchildren will plant the first of 660,000 trees in England’s largest forest for more than 30 years on Friday 23rd March.

Pupils from Glendale Middle School, Wooler, will help to begin the creation of the forest at Doddington North Moor, Northumberland.The new forest will provide significant benefits to the North-East economy – including short and long-term employment on site and a future timber supply to wood processors, including A&J Scott, which employs almost 150 people in nearby Wooperton.

The trees to be planted at the site have been provided by regional nurseries – Cheviot Trees near Berwick-upon-Tweed and Trees Please in Corbridge. Environmental benefits include the restoration of a rare peat mire on the site, the extension of a red squirrel buffer zone – and a research project to examine the impact of tree planting on reducing flooding.

Project manager Andy Howard said he had been staggered by the level of public support, with real enthusiasm for the way the scheme will create new mountain bike trails, opportunities for forest education and improved access to a bouldering site on the moor. Around 65,000 trees will be planted by the end of April, with the remainder following over the next two winter tree planting seasons.

Planting could not start earlier because Doddington was only approved on 30th November 2017 and significant preparation work, including clearing vegetation, putting up deer fences and mounding, had to be carried out – and was delayed by the Beast from the East. Planting teams from The Forestry Workers’ Co-Operative, in Pathhead, southern Scotland, will start work immediately after Friday’s ceremony.

Mr Howard said the trees planted in the coming weeks will be mainly Sitka spruce, but also oak, birch, alder, Western red cedar and Noble fir. Next winter, the planting will be a mixture of Sitka spruce, Scots pine, birch, aspe

Confor has welcomed the Prime Minister’s renewed tree planting commitment – but stressed that new figures show how difficult delivering this will be. After Boris Johnson included the target of planting 30,000 hectares of trees every year in his Ten Point Plan for a Green Industrial Revolution, Confor Chief Executive Stuart Goodall said: “The forestry and wood industry welcomes the Prime Minister’s personal commitment to increase UK tree planting rates to 30,000 hectares each year. This is a huge challenge for the whole of the country and, while some progress has been made, particularly in Scotland, current statistics show just how much needs to change if the UK is going to get to this level by the middle of the decade. “The Prime Minister’s plan coincides with the publication of statistics showing that in April- September 2020, only 763 hectares of land were newly planted with trees in England. “Confor has calculated England needs to plant at least 7,500 hectares of new woodland each year if the UK is to meet its overall target. This is roughly 10 times the figure reported by the Forestry Commission today, so the scale of the challenge is apparent for anyone to see.” The House of Commons Environment, Food and Rural Affairs (EFRA) Committee is currently looking at forestry and woodland management to see what lessons can be learnt from the failure to meet previous tree planting ambitions in England. Confor’s evidence to the EFRA inquiry calls for greater coordination between the different parts of the UK on how they will contribute to the 30,000 hectare target and highlights the need for big improvements to the process for approving planting applications in England. Mr Goodall added: “Now that the Prime Minister has put his personal authority behind the latest drive as part of his Green Industrial Revolution, it’s more important than ever to get the bureaucracy sorted and ensure all parts of the UK can deliver new planting to benefit the environment, business and the wider community.” * Confor is the trade body for the forestry and wood-using industry and represents around 1500 businesses across the UK. www.confor.org.uk

We use cookies on our website to give you the most relevant experience by remembering your preferences and repeat visits. By clicking “Accept”, you consent to the use of ALL the cookies.
Cookie settingsACCEPT
Manage consent

This website uses cookies to improve your experience while you navigate through the website. Out of these, the cookies that are categorized as necessary are stored on your browser as they are essential for the working of basic functionalities of the website. We also use third-party cookies that help us analyze and understand how you use this website. These cookies will be stored in your browser only with your consent. You also have the option to opt-out of these cookies. But opting out of some of these cookies may affect your browsing experience.
Necessary Always Enabled

Any cookies that may not be particularly necessary for the website to function and is used specifically to collect user personal data via analytics, ads, other embedded contents are termed as non-necessary cookies. It is mandatory to procure user consent prior to running these cookies on your website.